A new trailer for Black Adam, the new DC movie starring Dwayne Johnson as the titular antihero, was screened at San Diego Comic-Con. The protagonist took to the Hall H stage at SDCC in disguise and revealed that “the DC universe will never be the same again.”

The new teaser featured Black Adam taking on the Justice Society. “My powers are not a gift but a curse,” says Johnson’s antihero, “born of rage.” We then see Black Adam in action as Pierce Brosnan’s Doctor Fate warns him that he may either be the destroyer of Earth or the savior of it. “The world needed a hero, instead it got me,” he says.

During the panel, director Jaume Collet-Serra also revealed that they shot the final cut of the film the day before the panel. And it looks like he’ll have a big role in the DCEU going forward, as Johnson joked: “Our goal is to usher in a new era of the DC Universe with the Justice Society.”

Some footage from #BlackAdam just played. He sees some people discover his grave, waking up Adam. He fights them – his arms come off, he floats and choppers blow up and death everywhere #SDCCJuly 23, 2022

Black Adam first appeared in DC Comics during the 1940s as a villain who had been corrupted by power, then became an anti-hero in the early 2000s with no regard for rules and conventions.

Alongside Johnson, the film’s cast also includes Noah Centineo as Atom Smasher, who can control his own molecular structure, Aldis Hodge as Hawkman, and Quintessa Swindell as Cyclone, who has the power to manipulate wind and sound. Pierce Brosnan rounds out the cast as Doctor Fate.

Black Adam hits the big screen on October 21, 2022. In the meantime, catch up on the DCEU with our guide to watching the DC movies in order. You can also stay up to date on Comic-Con with our full SDCC 2022 schedule. 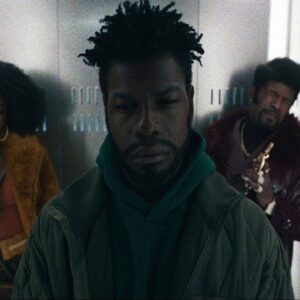