Black Rooster Audio released their version of the infamous Roland Space Echo the TD-201. But why do you need another Tape Echo? We tested it in the studio.

Knowing that the market is flooded with Space Echo emulations, we were curious when Black Rooster Audio released their TD-201 Vintage Tape Echo version. Throwing it over some stems from our Crocodylus Live from Happy performance, we tested this new plugin in the studio.

Black Rooster Audio has created some great plugins over the years, from iconic compressors to tape emulations, preamps, equalizers, and amp simulators; in fact, they recently released a free plate reverb plugin, the RO-GOLD (Yes… FREE, get it here). Recently, in mid-October, they released the TD-201, their reasoning: classic emulation of the Space Echo RE-201 with customizable, modern, built-in features. We tested it in the studio.

Starting with the Mono OH mic on drums, I had the idea to create a psychedelic, Tame Impala-inspired, lo-fi, echoy sound. There are so many controls on the TD-201 that one might feel overwhelmed, but if you take a breath and take a good look around you, you’ll realize that you can have a lot of fun.

I muted the dry signal, panned tape heads 2 and 3 left and right, leaving tape head 1 in the center, increased the input to distort the drums, lowered the top end with the tape treble (Tape Tre) and I just dropped a little low end on the Tape Bass. Call me old-fashioned, but I loved not being able to see the frequency I was adjusting. Use your ears, not your eyes!

Moving on to a vocal, I wanted to have some echo and that beautiful spring reverb behind the vocal. I shifted all the tape head positions too far to get that more distant sound, and dialed in only a small amount of reverb. It was pretty delicate, so I thought it would be best to include it in a send and use it that way, especially if you want it to sit behind the vocals. I also used all three tape heads and panned them to the ends.

I found the touch function and the equalizer at the bottom right very useful. While it was down in the bottom right corner, I accessed the settings menu. This is where you can resize the GUI, but I will say that I prefer when you can click and drag the corner. It was on the lowest size and still took up most of my laptop screen. The good with the bad, though, as the TD-201 has a ton of controls. 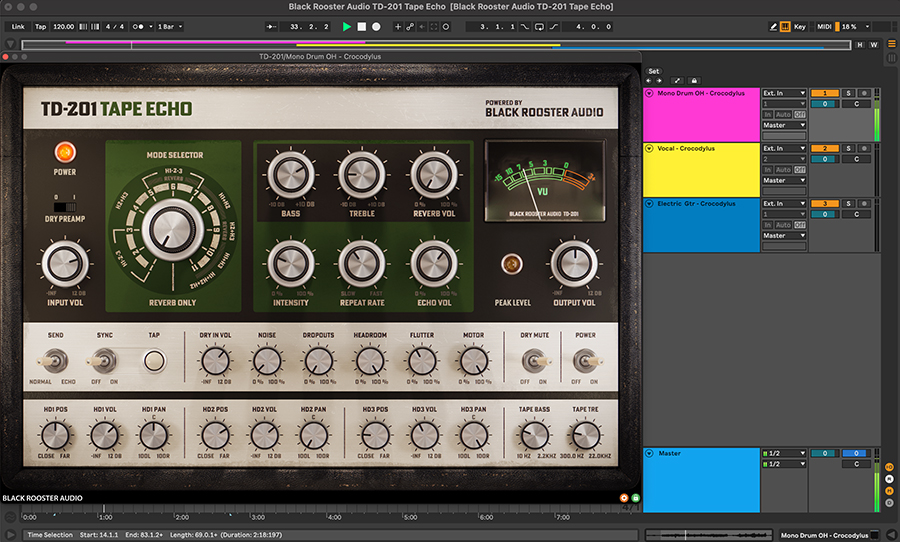 I think that’s why it appeals to me, the variance is huge and the layout makes it very easy to adjust controls like Noise, Dropouts, Headroom, Flutter and Engine.

For my final trick, I opened up the electric guitar. I already had a fair amount of vibrato in there, so I was aiming for a short delay. Something to give it more depth. Believe it or not, it was at this point that I realized that there are no presets. That’s great: sometimes presets get in the way of a sound. 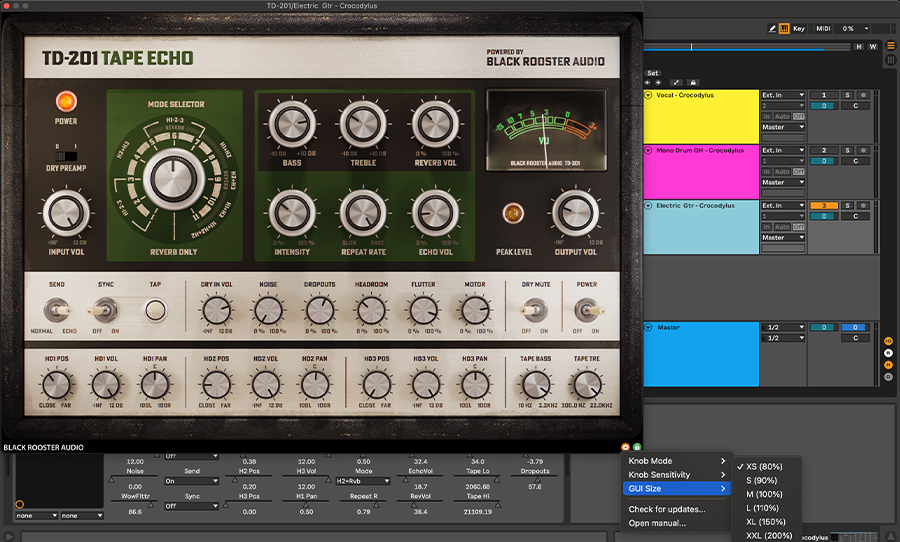 Speaking of travel, it took me a while to get the guitar to sound the way I wanted it to, but I got it done. With more bass and less treble, more flutter, more decay, switching the preamp dry, boosting the input and EQing my favorite section – the bass and treble ribbon.

I’ve really enjoyed playing with this, and I’m curious to throw it against a real one. Does anyone have an OG Roland Space Echo they’d like to lend us? Nope? Well, this plugin is $168 AUD, so you can get your echo a bit cheaper there.