Artist Liyah Knight has taken over her mother’s costume workshop once again, but this time to make a sampler pack of machine sounds, beads of all sizes and curious finds. Watch as she explores.

Choosing a space she’s all too familiar with, Liyah Knight entered her mother’s costume workshop, not to make another outfit for a show, but to make a sample pack. With a few Sennheiser microphones and a field recorder, she created her entire Somewhere Sounds sample pack in the small room that was filled with weird and wonderful things, including a cash register that had been in the family business for generations.

As she was no stranger to manipulating sounds in Ableton, she was eager to create something interesting and unique for you, her and her demo beat. Knowing that the workshop would be full of cool drums and percussion instruments, she made it her mission to try and get some melodic sounds.

For their Somewhere Sounds Sample Pack, an overlocker sewing machine was turned into a bass synth, a drum rack was created from another sewing machine, and some fancy hats, obviously made for the stage, were turned into a few different synths. . And that’s not all. Read on to see what he captured and how he processed them.

Starting with a Sennheiser shotgun microphone (Model MKH 8060) on a boom connected to an F6 field recorder and monitoring through Sennheiser HD 28-Pro headphones, Liyah went straight for the pearls. There was percussion galore in there, including a string rattle which later became a main percussion sound.

Realizing that there was more (fake) gold in the room, she sat down in front of the two sewing machines. When some of the sounds got too hot, she switched to the Sennheiser e906 dynamic microphone so those louder sounds wouldn’t be too crisp. This is where some kick drum sounds were born.

Exploring the far corners of the room, Liyah found an old guitar and, without even tuning it, switched microphones and played the guitar with some beads she had previously found. With a little experimentation, samples were created that bear little resemblance to how a guitar normally sounds.

Heading to another corner of the shop, he began to try out a cash register that has been in the family for generations. In fact, it was first used in his grandfather’s store!

When asked, Liyah Knight casually mentioned that she only uses 1 plugin, but this is not the case – she has taken these sounds far from their original source using loads of Ableton plugins. For example, in a sample of the Overlocker sewing machine that ended up being a synthesizer, she has 7 plugins that transform the sound.

It’s really interesting that the smallest of sampled sounds can create a synth that someone would never have dreamed of designing when sitting down to a classic like a Sequential Prophet or a Roland Juno. 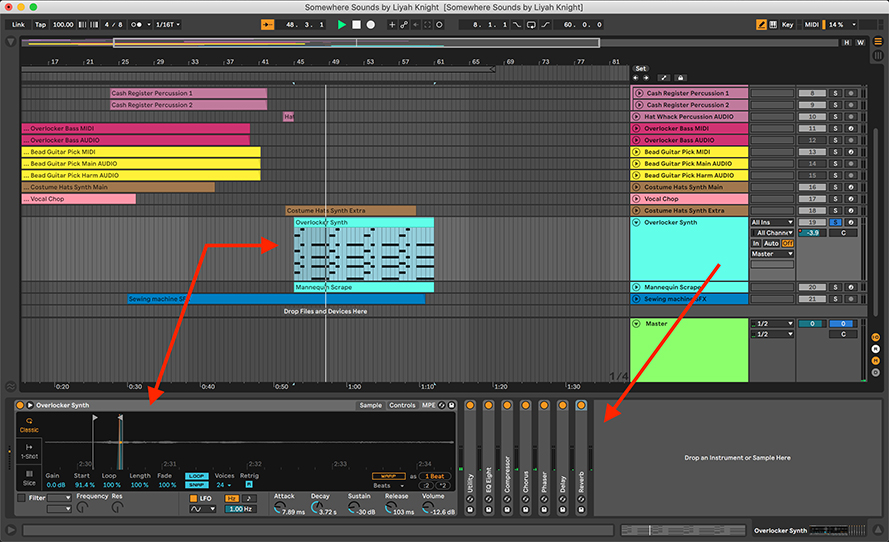 The drum rack is an exciting playground for sewing machine ‘hi hats’ and ‘toms’, cash register and ‘kick’ and ‘tom’ tape measure, and a maraca made from scrap fabric. There’s also the obvious percussion of the beads, as well as some clinks from a spray can.

Alongside the main drums, there is a considerable amount of percussion that he has created. There’s a cash register percussion group, percussion made by hitting those shiny costume hats, and a string rattle percussion. 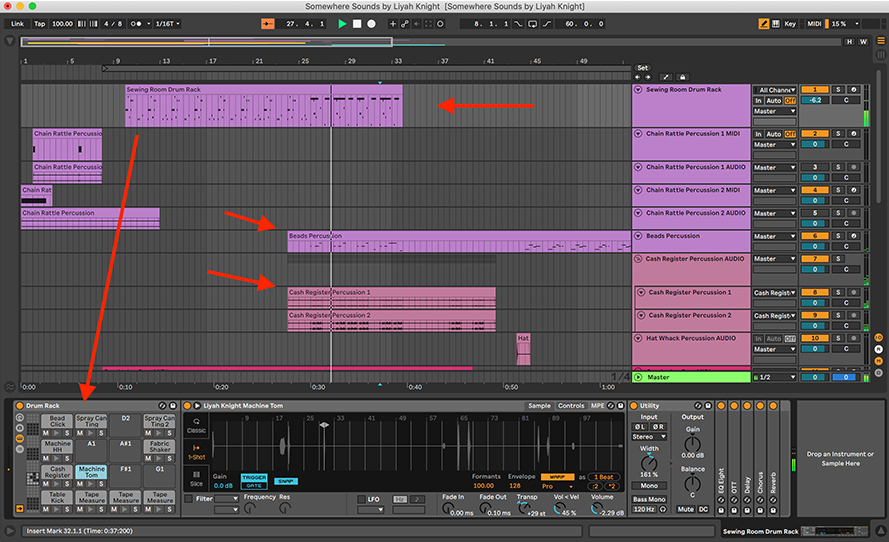 Without forgetting the main reason for the choice of the room (the sewing machines), there is an excellent “sewing machine” effects track that really has hardly any treatment. Although, that’s not to say it was an easy task.

To make the sewing machines create the sounds Liyah wanted, it was a delicate balance between pedal and microphone to get that ‘errrrr’ and ‘vrrrrrrmmmm’. Without soloing them in the Ableton Live Set, you’d almost think they’re some crazy synths going off.

One of the most interesting transformations in Liyah Knight’s sampler pack is the Overlocker Bass. It’s a great bass sound that holds the mix together and gets even more colossal with OTT (Over The Top) compression, a drum bus compressor and another final compressor.

It’s pretty impressive to hear the difference when you turn these compressors off. Using the drum bus compressor on something other than drums is another reminder to stay creative!

While the aforementioned guitar samples are really interesting sounds, there is some magic to be discovered in the costume hat synth. First, midi chord information is sent to the sampler, some choppy sound sculpting EQ, saturation, chorus, flanger, autopan, and more.

This synth creates a lot of the track’s melody and harmony, exactly what Liyah expected. There is an additional synth towards the end of your beat that has the same treatment, but acts as a long buzz. 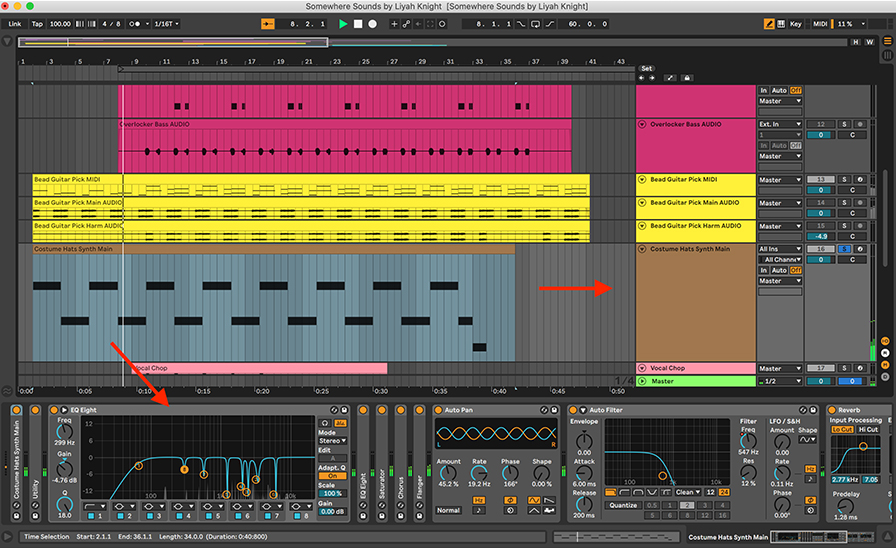 We could go deeper into this Somewhere Sounds sample pack, but you better go and explore for yourself and make some interesting and creative discoveries and maybe even add something else.

Download this pack and more from the other Somewhere Sounds series here, including Setwun, Jonti, Chelsea Warner and Mr. Rhodes, and you can also download packs from our previous series, Sydney Sounds here.

The adult stars of House Of The Dragon have finally arrived, and their rivalry is growing more intense. See also  Chris Hemsworth raises the stakes in the…