The NBA season is right around the corner, which means another inning in the NBA 2K The franchise is once again trying to be the best sports game available. This year, NBA 2K23 brings a host of new gameplay enhancements, a revamped Jordan Challenge, a huge city to explore in MyCareer, a new twist on MyNBA with different playable Eras, and other improvements that will keep fans busy for the rest of the year.

However, the cracks start to show after a few games and the immersion breaks much more easily than in previous games in the series.

From the moment you enter a game, which happens at lightning speed on Playstation 5, the atmosphere conveys the feeling of watching a real NBA game. The arenas are electric, the crowds are energetic, and the player introductions are entertaining. This has always been the case with the 2K series, but it’s especially prominent this year. Definitely, NBA 2K23 it is one of the most beautiful games of the current generation consoles and series; player animations, along with signature taunts and gunplay, help create a sense of place that few other sports games can muster.

It’s a shame, then, that the excitement wears off after playing a few games and hearing Kevin Harlan and Brian Andersen deliver the same comment they did two games ago. 2K23 it hasn’t done much to improve the already stellar lineup of announcers, and if you played last year’s title, you know what Harlan and Andersen will say after and between each big play.

And while the players are looking their best this year, there are still some issues standing in the way. Players’ eyes move randomly, and there are times when they cross paths with each other while interacting on the sidelines, all of which spoil some really fun moments and celebrations. Overall, it’s indicative of the series taking an “if it ain’t broke, don’t fix it” stance without upgrading and upgrading old systems to make them feel fresh.

2K23 has a lot to offer on and off the court, although the modes are almost the same as in 2K22. The differences lie in the choices you can make within those modes.

MyCareer is exactly what you’d expect: it’s a story that follows a budding star who faces an uphill battle to prove that they deserve to get to where they did in the NBA Draft. There are dialogue options that affect boosts in the game and shape the player you will become as your career progresses. The system takes inspiration from Mass Effect’s Paragon/Renegade system, only replaced here by the surefire Trailblazer, a la Mamba Mentality or General, which lets its gameplay speak for itself.

MyCareer is full of quest markers and points of interest; there are plenty of walks and quirky character encounters in the city, which is big for a sports simulation title. However, what you do between games is a bit tedious: you walk in The City to a quest marker, talk to a character, complete trivial objectives like doing two gym workouts, working out, and completing time trials on a skateboard. and then jump to the next game before repeating it all over again. Navigating in these areas feels especially sluggish, and pacing suffers as a result, further exacerbated by constant frame rate drops while browsing.

Overall, the experience is a bit clunky, especially since it’s a shared online hub and 2K23 it relies on an internet connection, which causes quite a few hiccups with connectivity and the inability to even access the mode close to launch. It was especially notable when using the NBA 2K app to apply a face scan to the player, which just didn’t work during my review.

In recent years, fans have lamented the MyCareer storyline for poor voice acting and goofy inclusions like Jake from State Farm. While the voice acting is much better this year, 2K23 yet Really wants to lean on his quirkiness: Jake is still here, and he’s joined by Ronnie2k and a host of NBA legends and stars like Zion Williamson and Kevin Garnett. While these characters are much more grounded and help drive the narrative to make your player a Legend, the interactions are still awkward and much of the dialogue, while well acted, isn’t well written.

Aside from MyCareer, there have been a few major additions to MyNBA that create more replay value and opportunities to experiment with the addition of Eras. With Eras, you can play from one of four major periods in NBA history: Magic vs. Bird Era, The Michael Jordan Era, The Kobe Era, and The Modern Era. Each one has different options and rules that are set before jumping into the first game of the season.

The All-Star game in the Kobe era and before, for example, still has fan votes but no captains. There is also the inclusion of the play-in tournament for the Modern Era. These differences are a great way to create more variety on the road to an NBA championship and create lots of fun “what if” situations to play. The Kobe era takes place right before the legendary 2003 draft class, so what if Cleveland didn’t get the No. 1 pick?

However, within each game, the on-court experience is relatively the same, with the exception of the Pre-Modern Eras, which don’t include halftime shows but have fun, old-school replay animations and graphics. along with a retro filter that conveys the feeling of watching historical broadcasts. Ultimately, MyNBA is still a great mode, and while it has lacked major updates, these updates are a step in the right direction.

There are also new additions to the WNBA modes across the board. However, the changes to these modes only reflect the NBA modes on a basic level. Even the game streams feel more stale compared to their NBA counterpart. It’s encouraging that the WNBA is getting more involved with the 2K series, but just like in real life, more attention needs to be paid to these modes and players to deliver better experiences. 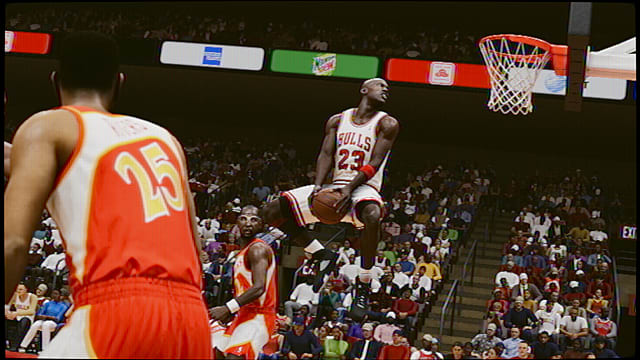 The Jordan Challenges return this year with 15 different career-spanning games to play as the legendary Bulls shooting guard. Each requires you to meet three conditions, such as scoring 19 points, winning a game by 15 points, and/or securing 9 rebounds in a game to earn three stars before moving on. That gameplay is complemented by authentic commentary that matches the specific game being played, and videos that are released before each matchup help to encapsulate the importance of the individual moment.

The difficulty of the Jordan Challenges is not unique to the mode. The NBA Changes 2K23 brings to the court to make the schemes around the isolation game a little more demanding. First off, the shot meter has been overhauled, and includes a variety of different ones to choose from, so the player doesn’t know if they made a green shot (made a perfect shot throw) until after the ball drops. in.

It’s also much harder to make a green shot if a defender is hard to shake, which makes the adrenaline rushes that help ball handlers create their own shots important. The trade-off is that those boosters deplete energy faster if you continue to hold the ball. This balancing act is meant to create more ball movement and prevent players from hogging the ball, especially in online play, and ultimately meshes well with the systems around it.

NBA 2K23 he brings quite a few changes to the pitch while making sure things feel the same and players feel comfortable. While that strategy mostly works this year, 2K needs to start rolling out better changes going forward.

Just because something isn’t broken doesn’t necessarily mean there aren’t cracks in the foundation and unfortunately that’s where NBA 2K23 it is, even if it is one of the best sports titles available.

How to fix Xbox and Cloud Gaming login issues for Fortnite

When playing Fortnite, you might run into a handful of bugs every time you try to enter the game. This can happen on the login screen or…

How to fix “Failed to download supervised configuration” error in Fortnite

Fortnite is one of the few live service titles that rarely deals with any major bugs or outages, though this doesn’t mean it’s perfect all the time….