Skip to content
Home jeu vidéo The new FPS from the Alien Isolation team is called Hyenas and is inspired by the multi-billion dollar space race.

Sega has finally pulled back the curtain on the new Creative Assembly FPS. It’s an ambitious-sounding multiplayer game called Hyenas, coming from the studio behind Alien Isolation, Halo Wars 2, and the Total War franchise.

Hyenas was revealed with a rather slick cinematic trailer, which is designed to give us a taste of the zero-gravity gunplay and focus on the fast-moving mechanics. While Creative Assembly has yet to show off any gameplay, its description of how the hyenas will play sounds like a twisted version of Hunt: Showdown, Crytek’s PvPvE shooter. The biggest differences are that Hyenas is set in space and clearly carries more positive and energetic vibes.

Set in a world where billionaires have abandoned Earth for Mars, tearing the planet apart with the same zero-gravity technology that allowed them to escape in the first place, Hyenas will have you and your friends banding together in teams of three to raid Plunderships, which they are sprawling malls filled with all manner of nostalgic objects that the rich want to use to furnish their Martian mansions.

To get your hands on this high-value loot (such as Panini sticker albums, SEGA Mega Drives, Sonic the Hedgehog keychains, and PEZ dispensers), you’ll face off against human and AI threats. Five teams in total (each consisting of three real players) will enter a single Plundership map, each trying to get the best loot and then escape. You’ll have to deal with “an arena playground of interlocking systems” and work smart to “exploit the environment, safety nets, hired goons, and competing teams” to gain an advantage. Oh, and interchangeable zero gravity zones that promise to create spectacular firefights.

It’s a far-fetched concept, which is why closed alpha registrations for Hyenas are now available to PC players. Executive producer David Nicholson recognizes how difficult this genre is to crack and Creative Assembly wants to be prepared. “We believe the key to modern shooter success is understanding what players want to see and where they want to take their experience. We know we have something exciting on our hands, but we also know the odds are stacked against us.”

“To take on the biggest games in the industry, we need to hear what gamers are thinking, up front and from the very beginning. If you’re in, we want to join you on the journey. That’s why after today’s announcement, we’re too launching the first of our public alpha tests.” 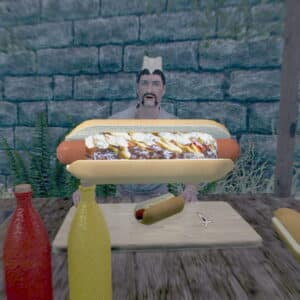