sorely in need of a Guide to the Cult of the Lamb for starters? The Massive Monster roguelike may seem cute and cuddly, but this heretical sheep hides a surprising amount of depth. Between managing the needs of your cult and venturing to kill the Cult of the Lamb bishops who rule the Lands of the Old Faith, it’s easy to get overwhelmed.

If you are completely new to the roguelike genre, don’t worry. Our Cult of the Lamb Beginners Guide includes the top 12 tips for beginners and veterans alike, ranging from combat to cult management. Heed our advice, and famine, dissension, and death will quickly become a thing of the past.

Enemies attack on sight, so stay stealthy by using cover.

Unlike many other roguelikes, regular Cult of the Lamb mobs aren’t alerted to your presence the moment you enter their lair. Instead, they only become aggressive once they see you, allowing for a certain degree of stealth. Hide in tall grass to ambush unsuspecting enemies, or use stone walls as cover to quickly dispatch mobs before they can bunch up and overwhelm you. 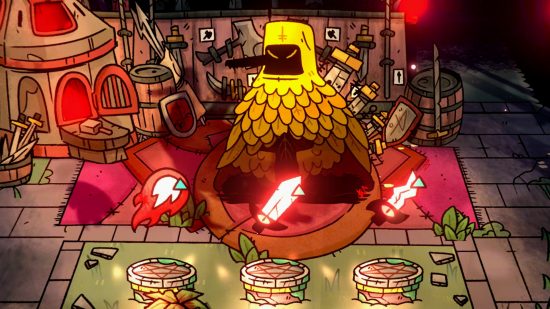 Along with the heavy RNG aspect of Cult of the Lamb, each weapon option will be given to you randomly. When you start a crusade, you will receive a random weapon and, after receiving your crown power, a random curse. While you have to take what you get here, later in your quest you may be offered three curses, three weapons, or a combination of both to choose from. Some weapons offer increased damage, others a shorter cooldown rate, and all vary in size and range. Think about which one you prefer and then choose wisely based on your playstyle, especially when it comes to curses.

You won’t take contact damage, so get up close and personal.

Contact damage is common in roguelikes, but not in Cult of the Lamb. You’re free to get as close to enemies as you like, and if you’re wielding a smaller weapon, it’s probably best for you. Just keep in mind that your melee weapon damage is only dealt when enemies are caught in the animation of their hit. If you are standing directly on an enemy to attack them, you will not take contact damage, but they will not take damage either.

See also  F1 Manager 2022: the trophies that even Ferrari will manage to win this season

This one is pretty obvious but very useful, especially when you factor it in with the previous point. Your little dodge spin is incredibly useful, especially when there are projectiles flying at you and multiple enemies closing in on you. Do it right though, because you’re only invulnerable while spinning. Not only is it convenient for dodging attacks, you can also use the roll to quickly close any gap between you and your attackers. 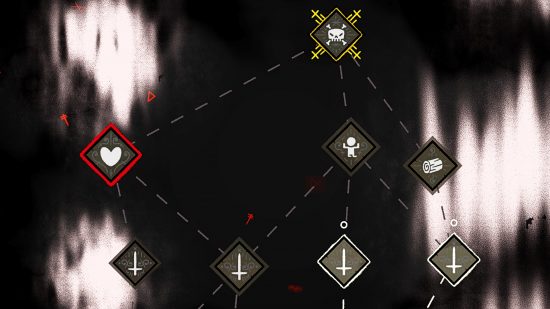 Learn the map icons to know which route to choose

Each region has a randomly generated roadmap with diverging paths that ultimately converge at that region’s boss gate. Often, you’ll be forced to choose from multiple routes, with no indication of what the next area has in store for you other than its icons.

Here are all the Cult of the Lamb map icons and what they mean:

As you progress through The Lands of the Old Faith, you’ll notice that some map icons also come with secondary icons attached. Attached to merchants, these icons can reveal which merchant you can expect to see, helping you make up your mind. With battle rooms, they can provide material bonuses or can change your rewards from gold to food. Use these secondary icons in conjunction with the primary icons to help you choose the most beneficial path for your current needs. 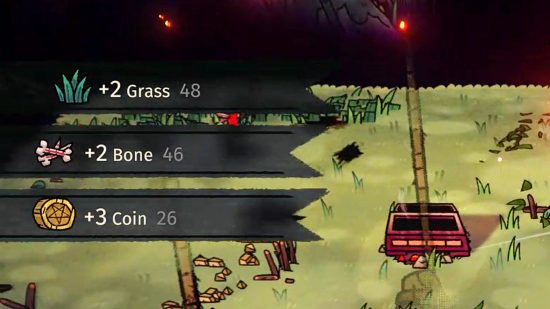 Destroy the environment by the materials used in construction, recipes and rituals.

While you’re wreaking havoc, your obedient cult followers will be hard at work gathering resources for you to put to good use. However, followers are restricted to collecting wood and stone from nodes that spawn within the cult’s grounds, and we’ve got a guide on how to get more wood and stone in Cult of the Lamb if you’re starting to run out. As in most crafting games, both materials are great for building, but useless for recipes and rituals.

To acquire a wider variety of materials, such as seeds, bones, and grass, you’ll want to get in the habit of breaking things while you’re busy quenching your thirst for bloodshed. You can even destroy the debris surrounding the merchants to earn a small amount of gold. Finally, if you are in desperate need of a particular material, pay attention to the route you are taking through the region. Selecting a floor marked with a material will send you to a room full of things to collect at your leisure. 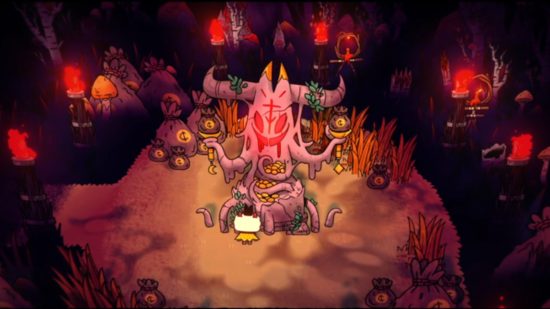 Don’t give stolen gold to the beast statue because it will know it was stolen.

Eventually, you’ll come across the statue of the beast, a demon-looking tree with gold coins flowing from its branches. You will be able to make an offering to the statue for 20 gold, a steep price, especially early in the game. However, the statue is also surrounded by bags of gold that you can destroy to receive gold and gold nuggets.

After cleaning and filling your coffers, you may be tempted to donate your ill-gotten gains directly to the statue. The statue will happily take it from you, but will recognize it as stolen and get angry, leaving you with nothing. 20 Gold is an amazing loot at the beginning of Cult of the Lamb, and it’s enough to build several buildings in your cult, so if you steal the gold from the statue, make sure to make like a tree and walk away. 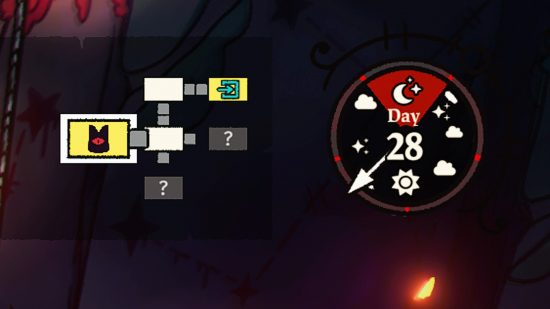 Time keeps passing during a race, so don’t leave your followers for too long or they will die.

Cult of the Lamb operates on a day and night cycle, requiring daily maintenance for your cult to survive and thrive. Not only will the various cooldowns reset over time, but crops will grow and followers will age. Be careful though: time waits for no lambs and the days will continue to pass as you fight through The Lands of the Old Faith. If you get stuck in a dungeon and leave your followers too long, you may come back to find them hungry, sick or even dead. Lack of sermons will also cause your cult’s faith to degrade over time and can eventually result in dissension among the ranks. 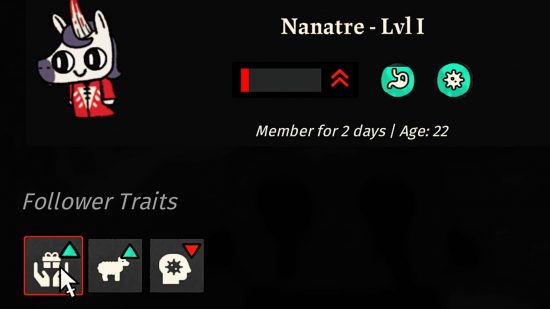 Whenever you recruit a new follower, you will notice that they have two or three “traits”. These can be positive or negative, but they can have a huge impact on your cult, so be careful to take note of them and use them to your advantage. For example, it’s possible for a follower to collect Divine Inspiration faster than others, so make sure you put them to work in the Sanctuary. Another may take longer to heal when he is sick, so do your best to keep him healthy. You can also unlock some gifts that you can give these followers to cancel out their bad traits or enhance their good ones.

See also  Obi-Wan Kenobi: 7 Star Wars films and series to get the new saga off to a good start on Disney+

At first, you won’t be able to recheck your follower’s traits once you’ve indoctrinated them, so you might want to try and remember any that stand out. Early on, The One Who Waits will give you one of the Cult of the Lamb Doctrines, specifically the one that allows you to read minds. From then on, you can read a follower’s mind to see their characteristics.

If you’ve played any kind of life simulation game before, or even owned a Tamagotchi once, you’ll be familiar with keeping your people, pets, or followers happy. In Cult of the Lamb, unhappy followers won’t just keel over and die, they’ll pull out the megaphone and start speaking against you, turning everyone else against you as well. As such, it’s very important to stay on top of the well-being of your followers, as it can quickly turn into chaos. Another trick to this is those Follower Traits: some followers are more likely to dissent, so give them gifts, take extra care to keep them happy… or count them as your first sacrifice. 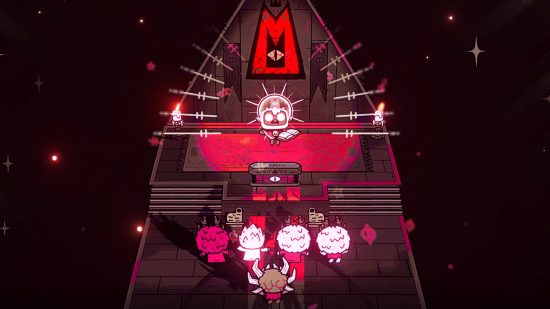 Consider when you give sermons for maximum attendance

Giving charismatic sermons is one of your most important roles as a cult leader, but consider when you perform them. You can only give one sermon per day in the game, but each follower present adds to your faith. Make sure you’ve indoctrinated new followers first, and make sure no one is sick, asleep, or otherwise busy. If you’re on a crusade during the day or just forget it, it’s not worth waking everyone up for a nightly sermon, as you’ll actually lose faith by disturbing them.

Use Divine Inspiration wisely to improve your worship

You will gather Divine Inspiration from those followers you put to work in your cult’s central shrine, which you will use to upgrade your cult’s base by upgrading your temple, farms, and dormitories. You can view the full Divine Inspiration upgrade tree at any time from the moment you build your shrine, so take a minute to decide which route you want to take. The more you unlock, the more inspiration you’ll need, so make sure you use it carefully.

With these tips, your cult is sure to prosper, as you lead your followers, eliminate your enemies, and cultivate your land. But if you’re still not feeling ready, check out our guide to the best Cult of the Lamb upgrades so you know what to spend those divine inspiration points on. 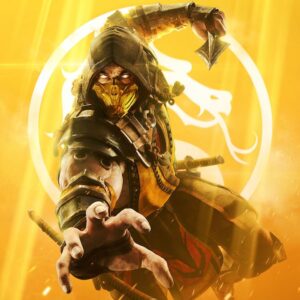