Mom: We have Bloodborne at home.

They say that in capitalism markets always correct themselves. The PC audience wanted Bloodborne for a long time, but Sony, even if they shared some crown jewels like Spider-Man, God of War, and Horizon, held on tight to its exclusivity. Market forces rolled up their sleeves and adjusted their hats; They got this, don’t worry. Bloodborne for PC is out of the question for now, but we may have Thymesia as a consolation prize. Let’s hear the thunder yay!

Thymesia is a Gothic Soulsborne that shares a lot of visual and conceptual DNA with Bloodborne. The once prosperous Kingdom of Hermes had fallen into the abyss. The deadly plague devastated everything, but the official response was even more damaging. The alchemists of the realm experimented with blood concoctions and accidentally triggered the vile mutations. Corvus, an amnesiac protagonist dressed in black, found himself in the infected city, but after a brief confrontation with a powerful boss, he awoke inside the Hunter’s dress… Philosopher’s Hill. There, he will talk to the mysterious doll girl, who will help him piece together his repressed history. 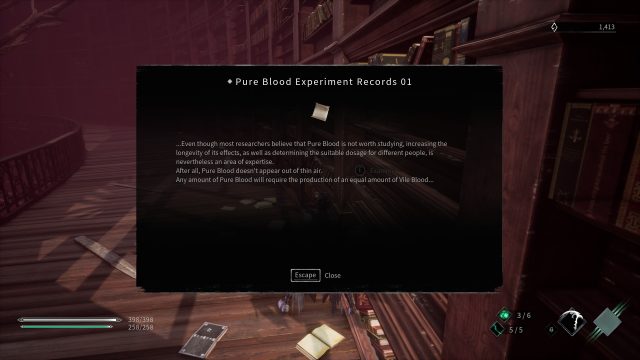 The “borrowing” is quite shameless but presumably within legal limits. Unfortunately, Thymesia almost completely fails at the finer points of worldbuilding, both figuratively and literally. The bits of knowledge you’ll collect during the adventure are amateurishly written and paint a predictable picture. The snippets discussing “pure blood” and “vile blood” are particularly embarrassing due to the literal banditry of other people’s creative efforts. The ambient storytelling is also raw and lacks the subtlety present in every From Software game. The game exudes ambition to imitate but stumbles at every turn.

Compared to the sprawling, brilliantly designed city of Yharnam, here we have claustrophobic-inducing labyrinthine levels accessed via Philosopher’s Hill. After beating the boss at the end of each zone, you will unlock side quests. Those use the same general layout, but parts of the level are inaccessible, funneling you through a (mostly) linear path to the end. Well, I guess this is a cheap way to extend your gaming time. Creating new environments from scratch takes time, and time is money. Those alternate quests also lack random elements. Not only do we not get the proper equivalent of Yharnam, but we also don’t get anything close to chalice dungeons. You’d somewhat expect those with all that mirrored design. 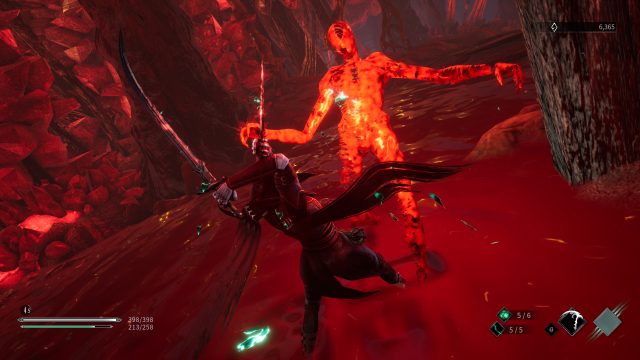 The essential saving grace for Thymesia is explosive, fast-paced combat packed with exciting ideas. All enemies, including bosses, have two health bars; the former is “normal”, reduced by hitting them with saber attacks which slowly reveal the “injury” bar located below it. For wounds to become permanent, you must use claws or secondary weapon attacks and do so quickly, so they don’t heal. So you can’t rely on a single, repetitive damage procedure; you need to use smart, timed rotation between two or three types of attacks.

Aside from a few archer and magic mobs, Thymesia is a mostly melee oriented game. Its blistering pace is due to the fact that neither the normal attack nor the claw attack nor the dodge/parry use stamina. The double edged sword that you can attack as a hornet from hell is that the bosses follow the same principle. Most normal human-sized bosses are absolutely relentless in their attacks and don’t offer even a second of respite during fights. The result is that those fights are physically demanding, requiring constant dodging, repositioning, and rotating attacks. I’ve played most of the Soulsborne games through to the end, but I’ve never felt this drained after several tries with an average boss. Want to burn off some excess calories? Play Thymesia. 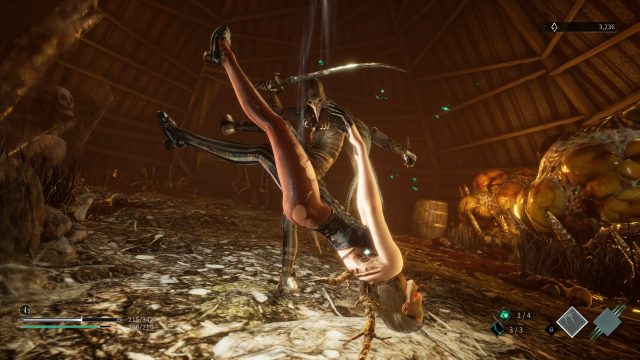 Stamina, or energy, is spent by attacks with special weapons. Those weapons represent the riddled versions of standard melee weaponry such as swords, knives, hammers, scythes, etc. They deal different amounts of damage and, if buffed enough, add a beneficial effect for the player and/or a status effect for the enemy (such as temporary stagger). Scythe, for example, heals you with every hit he lands. Unlocking secondaries takes time and effort, as their shards must be obtained by defeating mobs and bosses wielding the same weapons. Aside from those shards and upgrade mats for the HP flask, there’s no loot in the classic sense.

As in Sekiro, the main weapon is set in stone. The trusty saber cannot be replaced, but you can increase it by unlocking the various talents. There are multiple efficient builds in Thymesia, but talent points are limited; after twenty-five or more levels, you only get a single stat boost after a ding. Fortunately, you can reset talents if you pick something that turned out to be useless, like parry augment nodes. Parry in this game is abysmally bad, so to avoid him I recommend going the dodge talent route. Talents that replenish energy for secondaries are also useful, especially if he uses them with weapons that restore HP, like a scythe.

Is it worth your time? 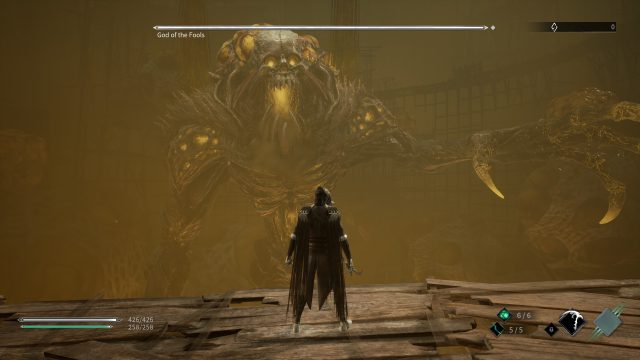 There’s a significant contrast between the sharp, exciting combat and the monotony of everything else in Thymesia. The derivative plot and poorly designed linear environments get boring pretty quickly. On the other hand, the game is reasonably priced, and it is a fact that most players have already managed to extract every molecule of content from Elden Ring. There aren’t many Soulsborne games floating around these days, and for that reason alone, Thymesia is worth considering.

The adult stars of House Of The Dragon have finally arrived, and their rivalry is growing more intense. See also  Xiaomi Mi 3 : la princesse des…